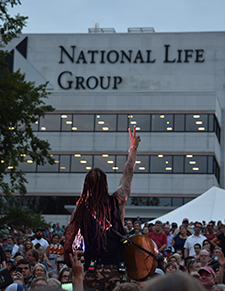 “We had an awesome crowd here on our hill this weekend to Do Good while also having a lot of fun,” said Mehran Assadi, chairman, president and CEO of National Life. “We were thrilled that Michael Franti & Spearhead’s message of hope and inspiration so closely matched our own corporate values.”

With this year’s $50,000 donation, Branches of Hope, the cancer patient fund at Central Vermont Medical Center, has received a total of $185,000 in contributions from the Do Good Fest since 2014. Patients who may be out of work while undergoing cancer treatment can draw money from the fund to help cover bills and unexpected expenses.

“A cancer patient has enough to worry about while they’re recovering,” Assadi said. “How to put food on the table or pay for a tank of gas shouldn’t be among those worries.”

The Point radio network is National Life’s partner in staging the Do Good Fest each year. The festival’s other sponsors are Seven Days, Harpoon Brewery and Montpelier Alive.

In addition to Michael Franti & Spearhead, this year’s lineup featured Noah Kahan, along with Hailey Knox, Syd and SoundBrother.

National Life is here to bring you peace of mind. We’ve been keeping our promises since 1848. Believe in tomorrow, do good today. Learn more at NationalLife.com