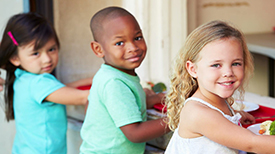 Published by the Urban Institute, an independent research organization based in Washington, D.C., the report highlights key contributing factors to childhood food insecurity and hunger in Vermont, including how school consolidations are extending bus routes for some children, resulting in missed breakfasts at school.

“As we researched this issue and met with stakeholders, caregivers, and children who are faced with hunger, we were struck by the collaborative and innovative efforts that are currently underway in Vermont,” said Susan Popkin, director of the Urban Institute’s Housing Opportunity and Services Together Initiative and an Institute fellow in the Metropolitan Housing and Communities Policy Center.

“Gaps and opportunities also became clear,” she added. “For example, rural isolation and lack of consistent public transportation makes it difficult for children to access nutritious food, especially during the summer and school breaks.”

The report also calls out how the opioid crisis has affected food insecurity with children who are now being raised by grandparents or other caregivers. Many “grandfamilies” are on fixed incomes and have to stretch their resources to care for unexpected additional family members.

“We’ve been fortunate to work with smart, creative people in all sectors who are working hard to end childhood hunger in Vermont,” said Beth Rusnock, president of the National Life Group Foundation. “But we also know there are 19,000 confirmed cases of children who don’t have enough healthy food to eat. These kids are our state’s future. The Urban Institute’s report will help us collectively address this issue so no child goes hungry.”

Other key findings in the report include how a worker earning Vermont’s minimum wage of $10.50 an hour would have to work 85 hours a week to afford a modest two-bedroom apartment. Vermont also has the nation’s eighth-highest electricity rates. These high cost of living expenses have a direct impact on a family’s ability to provide healthy food.

The full report can be found here.

National Life is here to bring you peace of mind. We’ve been keeping our promises since 1848. Believe in tomorrow, do good today. Learn more at NationalLife.com