* required fields
** This selection will redirect to ContactUs page 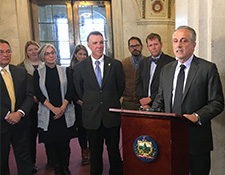 Montpelier, VT - (December 12, 2017)  National Life Group announced Tuesday that the annual budget of its charitable foundation will double to $2 million next year, reflecting the company’s strong sales and earnings growth over the past decade.

Part of the National Life Group Foundation’s increased funding will go toward launching Main Street Grants, a new project designed to support revitalization of downtowns. Another new initiative targeting ways to combat childhood hunger is currently being developed and will be announced in coming weeks.

“When you’re doing well, you need to show up in more ways in the communities that you’re part of,” said Mehran Assadi, Chairman, President and CEO of National Life Group. “As citizens of those communities, we need to pay back, pay it forward.”

Assadi advocated boosting the charitable foundation’s budget over the past several years. When the foundation was established in 2006, its budget was $350,000. With grants in 2018, it will be $2 million.

One of the new initiatives that the National Life Foundation will fund in 2018 is Main Street Grants, a pilot project aimed at Vermont downtowns. Up to $50,000 in grants will be awarded to downtown organizations to help fund projects that help drive the economy, promote cultural outlets and foster a sense of pride.

The National Life Foundation worked with the Preservation Trust of Vermont to create the program and has partnered with the Vermont Community Foundation to leverage additional investments in the state’s downtowns.

The National Life Foundation will continue to make general purpose grants to qualifying nonprofits in central and northern Vermont and in the Dallas, Texas, region. Also as part of its increased budget, the foundation will focus on how it can help to reduce childhood hunger in Vermont. A specific program is being developed and it will be introduced early in 2018.

“National Life’s values are Main Street values,” Assadi said. “We strive to do good, be good and make good in how we do business every day. This increased investment in our charitable giving is one more way to reflect our values.”

At National Life, our story is simple: For more than 169 years we’ve worked hard to deliver on our promises to millions of people with our vision of providing peace of mind in times of need. It’s our cause, stemming from a deep passion to live our values to do good, be good and make good, every day. Learn more at NationalLife.com.