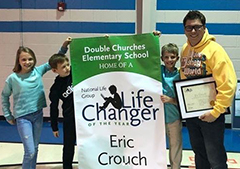 Montpelier, VT - (August 7, 2020)  Eric Crouch, a fifth grade teacher at Double Churches Elementary School in Columbus, GA, has been selected as the Grand Prize Winner for the 2019-2020 national LifeChanger of the Year award.

Nominated by his school principal, Crouch earned the national Grand Prize--which includes a $10,000 cash prize--for his ability to connect students to their passions and empower them to make a difference. He was chosen for the award out of more than 850 nominated teachers, administrators and school district employees from all 50 states and the District of Columbia.

“Mr. Crouch teaches his students and colleagues that the world is their community. He has found his gift, and that gift is connecting students to their passions and giving them a space and a voice to make a difference in the world,” said Paula Shaw-Powell, principal, Double Churches Elementary School. ‘Love first, teach second,’ ‘we are all here to help one another,’ and “the whole world belongs to each of us,’ these are just a few of the many things you will hear Mr. Crouch saying through the hallways of Double Churches.”

Crouch was moved to become an educator after his own struggles in school due to attention issues. As a result of his experiences, he made it his mission to engage his students and give each of them equal opportunity to discover their passions and use them as a vehicle for achievement. To that end, he uses a variety of methods to help his students’ enthusiasm take off, including a Project-Based Learning model in his classroom that encourages innovation and creativity.

He also encourages his students to channel their passions into serving the community and making a difference. When Hurricane Michael devastated a nearby community in 2016, he and a few of his students immediately took action. They traveled to Bay County, Florida, to interview teachers and other individuals impacted by the hurricane, and create a documentary to spread awareness for the thousands of families who had been displaced. After being shared by thousands on social media, the documentary drove close to two million dollars in donations to Bay County School District.

Crouch’s community work with his students has made a global impact. As a Skype Master Teacher, he leads his classes to engage in Skype collaborations with students from around the world.

When his students connected to HIP Academy in Kenya for a cultural learning exchange, it soon became clear that there was much more they could contribute. Together, they founded a 3D-printing non-profit and raised thousands of dollars to build a school in Kimilili. With the success of this project, Crouch’s students also donated 10 iPads to the students at HIP so they could create an iPad lab for the school.

He also encouraged his students to experiment with their own 3D-printing projects, such as creating 3D prosthetics for pets and working with engineers to create robotic stuffed animals to teach students how to communicate their social and emotional needs.

“We’ve all been reminded of the importance of our teachers during these times,” said Mehran Assadi, CEO and President of National Life Group. “Eric is no doubt among the best of these selfless educators. We are inspired by his commitment to preparing and empowering his students to become tomorrow’s activists, leaders, and changemakers.”

About LifeChanger of the Year

LifeChanger of the Year is an annual program sponsored by the National Life Group Foundation that recognizes and rewards outstanding K-12 educators and school district employees who have demonstrated a proven ability to make a beneficial difference in the lives of students.

In addition to Crouch, four other educators from across the country were recognized as 2019-20 LifeChanger of the Year Grand Prize Finalists. Each Finalist received a $2,500 cash reward with a matching $2,500 donation made to their schools.

For a complete listing of this year’s LifeChanger of the Year winners, visit: https://www.lifechangeroftheyear.com/201920-winners

In Texas, due to regulatory concerns, National Life Group will donate similar items to the winner or a nonprofit group of NLGroup’s choice that supports the winner’s school.